I was in charge of the Kindergarten Halloween Party this year.  I created these 2 interactive games for them to play (with a little help from my hubby) – Ghost Bowling and a Pumpkin Bean Bag Toss.

For the Ghost Bowling – Take six empty 2 Liter soda bottles and paint with white paint.  Paint on black facial expressions and fill with a little bit of sand to give them some weight.  (pic taken before final coat of black paint on the eyes..be careful to paint them laying down so the paint doesn’t run.) We painted a jack o lantern face on a basketball, but you could also use a real pumpkin.  The kids loved it!  Watch out for a little mess though, as the paint did end up chipping off the ghosts towards the end.

For the Bean Bag Toss – we got a large box from a neighbor who worked at a hardware store and then spray painted the front black. We used construction paper to make the pumpkin faces and cut through the box to make holes for the mouths.  The kids took turns tossing the bean bags to see which mouth they could get them in.  Our box was open on the bottom so we could easily lift and retrieve the bean bags after each round.  It was kind of a back breaker for the parent helping out…I would suggest a broom to help gather the bean bags!

We also played Halloween themed Bingo (with candy corn place markers) and did a coloring craft.  Of course, there were also snacks galore – the party was a big hit!

*Later that night I set out the pumpkin bag toss for trick or treaters to play and they loved it! 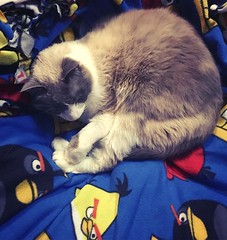 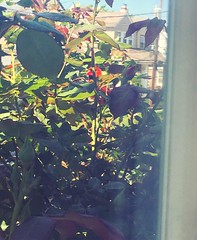 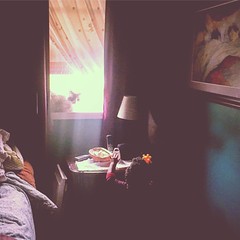